If you’ve read my previous post, Why I Support the Bloomington Thunder, you will know that I am a raving fan. Along those lines, I started a project to model and render a hockey puck. This was not as easy as I had initially thought (gee, what a surprise) but initiated some valuable lessons in the process.

A hockey puck, for those unfamiliar with them, is the black cylindrical object in the middle of the picture for this article. It is made of hardened rubber and can travel at speeds upwards of 60 miles per hour on the ice. This Wikipedia article on slapshots lists the fastest slapshot as going 108.8 miles per hour after being hit by a human being.

Needless to say, my modeling skills were moving nowhere near as fast as a hockey puck (see inset). The challenge, it was soon evident, was the lattice-like pattern around the side of the puck. After much searching and trial and error, I was able to achieve a reasonable hockey puck. Now for the ice!

I would like to take a moment and remind us all that like most good software, Blender only does what we tell it to. The trick lies in knowing how to explain what we want the software to do so that it does it the way we want it to. This brings to mind some interesting parallels for those of you that have ever been in charge of caring for young children. There is an old programmer’s adage “GIGO” which translates to “Garbage In, Garbage Out”.

Much like computer software, our interactions and relationships with others are only as good as what we put into them. Much like my work with this project, my relationship with my son, or my wife can only improve as I spend more constructive, active time with them. Even though I know this logically, something in that clicked while working on this project. I think some of it was due to the fact that every time I sat down for a session with this project I saw a measurable difference in the output (usually for the better) and an increase in my ability to maximize the next session.

So the next time you are frustrated with your significant other, your children or your friends ask yourself how much time you have spent working on your “Dad/Husband/Friend” skills and what quality level that time was. This is not to say that every interaction needs to be heavy, planned and dripping with import. More to say that like everything else, it improves the more you work at it. So work at it!

For reference, this is the first render I did for this project once I got the puck model the way I wanted it. What a difference effort makes. 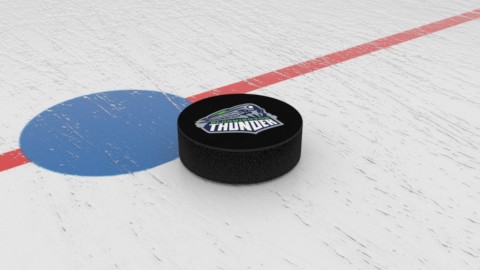